Washington, D.C., and Baltimore, Maryland, are cities with a great deal of shared history and current troubles. Both are often discussed as violent cities with high homicide rates.

But how bad is it really? Amos Gelb, founder and publisher of DC Witness and Baltimore Witness, websites that combine transparency and data to ensure accountability in the criminal justice system, believes no matter how bad it sounds, the reality is much more stark.

“The idea is that you can’t have change unless you have transparency and accountability. Our methodology is that transparency leads to accountability leads to change,” says Gelb, who stumbled into data journalism after working with CNN, Nightline, Discovery Times and other outlets. 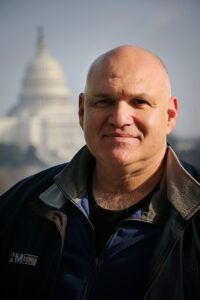 Amos Gelb is the founder of DC Witness and Baltimore Witness.

The problem with most crime reporting, he says, is that the data isn’t always reliable or all-inclusive.

“A lot of people report about crime but nobody is gathering the data,” he says. “The fed’s data is dependent on contributions, voluntary contributions, in the court system. Did you know DC police, in their homicide count, does not include cop-involved shootings? The numbers people are relying on are not necessarily independent.”

Crime reporting, too, is often tied to something akin to sensationalism, the old “if it bleeds, it leads” approach. He mentions the death of a young Black reporter, who was in Southeast D.C., “stepped off a bus and walked into a shootout and someone used her as a human shield and she died,” a crime that happened while the rest of the region was shocked by the torture and murder of a wealthy white family in Northwest D.C.

Gelb struggled with the ethical dilemma, as a journalist, of deciding whose death was worth reporting and whose was not. “We decided every homicide would receive the same coverage (at Witness ) … In creating our methodology, we decided to track every homicide, starting with the homicide, and track every one from act to judicial resolution, tracking, gathering every piece of public data and putting trained reporters in every hearing of every case, to both verify and amplify the data because we all know, in the end, it has to come out in court.”

That’s what he believes sets Witness apart from other crime reporting operations, including Court Watch and others. “We’ve created a methodology that marries the journalism with the data and the transparency. I would argue, in DC we know we have better data than the city has because they’ve told us that. We’re the only ones going across the whole system.”

For those who might ask what’s the point of this kind of exhaustive coverage, Gelb says there needs to be good, thorough reporting on all facets of the criminal justice system in order to find the problems within it and fix it.

“There are incredibly passionate, well-intentioned folks out there, advocating for all kinds of things, but there just isn’t the data. You can’t fix it unless you can count it. Imagine trying to fix COVID if we didn’t have the numbers, if we didn’t know what was happening. That is the problem you have across the country,” he says.

And it isn’t just one singular system: “There are thousands of individual criminal justice systems. We are now in Baltimore as well as D.C. and, I have to tell you, at times it’s like covering Slovenia and Azerbaijan. They’re not the same system. The fixes that would work in DC would not work in Baltimore and vice versa.”

Even the methods of homicide are different. For example, while most of the homicides in D.C. were, and are still, gun related, Gelb and his team found that, while there were 15 stabbings out of more than 200 homicides in 2020, that number doubled in 2021, underscoring, to him, a different kind of intense, personal violence.

But there’s a shared root to the killings: In D.C., “we’ve seen that the number one motivation was petty insults and petty disputes,” he says. “In Baltimore, the number one cause of homicides is retaliation because there’s no faith the city is going to deal with the person who shot your loved one, so you’re going to do it yourself.”

Amos Gelb is the founder and publisher of DC Witness and Baltimore Witness, which combine journalism, transparency and data to ensure accountability of the criminal justice system in Washington D.C. and Baltimore.