Reporters can spend an entire eight-hour day working on a story, furiously making calls, checking details and facts, writing and editing and reviewing and still need more time before the piece is ready for release into the world.

Megan Cloherty and Luke Garrett start their day around 9:30 a.m. and, before 4 p.m., need to pick two stories of the day for their new podcast, report and research the topics, record and produc 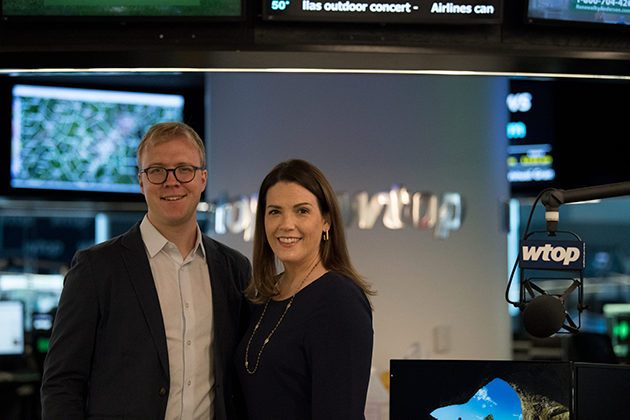 Luke Garrett and Megan Cloherty are hosts of the DMV podcast.

e the episode and have it available to listeners.

“It’s a management of workflow,” says Cloherty, who is one of the founders of the It’s All Journalism podcast and was a co-host in our early years. DMV Download, which launched recently from WTOP, is her third production after this show and is one for which there are two people on staff: herself and Garrett.

“I think every day, when we pick a story, when we look at it, we try to determine how it impacts local residents. That’s who we’re trying to talk to and talk about,” Garrett says. “There are so many national podcasts. But to have 20 minutes of a place where people are trying to understand stories and news locally, it’s an exciting endeavor.”

WTOP, with its fast-paced approach to covering local, national, international and business news in addition to traffic and weather (on the eights!), already does a thorough job in keeping listeners updated to what’s happening in the world.

“This is picking two stories, sometimes three, and going deeper,” Cloherty says of DMV Download. “For a WTOP listener, it’s ‘I heard that story earlier but I want to learn more about it, I can turn to the podcast and get more on a local story.’”

For D.C., of course, sometimes it’s hard to separate the local from the national. With the recent leak of a draft opinion from the Supreme Court on abortion, instead of discussing the headlines that could be picked up anywhere, Cloherty and Garrett looked at the implications for D.C., where there is no local governance or governing body, like a statehouse, because Congress has to approve all local regulations.

“Because our area is generally … more lenient when it comes to abortions than other states and other areas, when people who live in our area think (prohibitions on abortion) can’t happen, it will affect the places that are more conservative. That’s not true,” Cloherty says.

513. Reporting for seven decades on the free speech frontier