It all started last August when I met Miranda Spivack, an independent journalist and the Pulliam Distinguished Visiting Professor of Journalism at DePauw University in Greencastle, Indiana. She’d just participated in a panel on government transparency at the Association of Alternative Newsmedia’s annual conference in Washington, D. C. 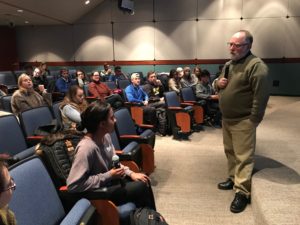 It’s All Journalism Producer Michael O’Connell talks to a student during a live podcasting recording at DePauw University in Greencastle, Indiana. (Photo courtesy of Miranda Spivack)

I invited Miranda to come on into the studio and record a podcast. We had a great conversation. In turn, she invited me to visit DePauw to talk to students about podcasting.

That’s how it is sometimes. One invitation leads to another.

So, on Monday morning, Feb. 5, I showed up at DePauw with my laptop and recording equipment, ready to spread the good word about podcasting.

I had a blast.

First up, I talked to eight of Miranda’s students about how to put a podcast together. They’d each gone out and interviewed their fellow students about “fake news.” I helped edit the interviews down to a six-minute podcast and posted it to the It’s All Journalism SoundCloud account.

Later in the day, I gave two presentations about launching a podcast and what makes a good podcast. During the second presentation, rather than do a Q&A, I turned the tables on the audience. I handed out wireless microphones and ask them: “Where do you get your news?”

On this week’s It’s All Journalism podcast, Producer Michael O’Connell travels to DePauw University in Greencastle, Indiana, to talk about podcasting. In a live podcast recording, he asks a room full of college students how they get their news. It’s a fascinating peek how young people consume their news.

#292 – Where do college students get their news?