Dance has long been an important part of Norma Porter’s life.

“I’ve been dancing since about 4,” she said. “I started at a local studio … (and) moved on to a program at the Duke Ellington School of the Arts.” 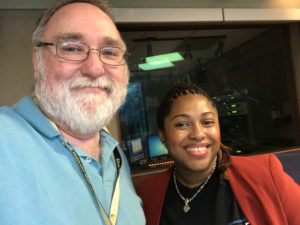 But by the time she was in high school, she was a little burned out on that world and took a break.

Porter’s parents wanted her to pursue a degree in a program that would have better odds at a stable career, leading her to study journalism with a minor in dance at American University.

It was the interactive journalism program at American University that put dance back in the forefront of her life.

A class assignment involved either speaking to a journalism startup about their business model and how they got off the ground or to develop a business model for a new publication.

“I had been out of dance for a long time,” she said. Porter had an idea for a publication focused on dancers, and dancers of color in particular, written by dancers and aimed at schools that had otherwise been largely ignored by mainstream media publications.

“There are two major black dance companies that most people know about, the Alvin Ailey Dance Company and the Dance Theater of Harlem. Those were the only companies you saw,” Porter said. “There’s got to be more. I think the journalistic person in me felt there had to be other people like me, in cities across the country, or self-taught dancers that were making dance and performing. Their stories needed to be told.”

She discussed her idea with one of her former teachers, Carol Foster with the International Association of Blacks in Dance, who mentioned the organization’s annual conference that happened to be coming to Washington, D.C., in just a few months.

“I was pushed out there and it was interesting because I probably would’ve never done it,” she said.

Porter introduced the concept for Black Dance Magazine in early 2013 and published three issues that year before going on hiatus so Porter could take a longer, more serious look at the publication and its audience.

Now Porter lives in Philadelphia, working at Temple University, spending a lot of her time with the Boyer College of Music and Dance. She’s seeing more dance and getting ready to relaunch the magazine in January 2019.  This time around, thought, the magazine has nonprofit status through its relationship with the International Association of Blacks in Dance. Porter is also running a GoFundMe fundraiser to start the project out right.

On this week’s It’s All Journalism, Producer Michael O’Connell talks to publisher Norma Porter about the relaunch of Black Dance Magazine, which tells the stories of dancers of color. Porter is running a GoFundMe fundraiser for the magazine, which will relaunch in January.