It seemed like a crazy idea, traveling 7,000 miles to talk to Tajik journalists about podcasting. According to Reporters without Borders, Tajikistan ranks 149th out of 180 countries on the 2018 World Press Freedom Index — the U.S. ranks 40th. Podcasting was the last thing the country needed.

At least, that’s what I thought at first.

But spending 9 days in country talking to young people and media professionals, I realized that podcasting could be something of great valuable in Tajikistan.

Certainly, the country, its people and those journalists striving to tell impactful stories there, face many challenges.

From an economic standpoint, the country is poor. Many people emigrate to other countries in the region, primarily Russia, to earn money to send back home.

From a technical standpoint, Tajikistan does have the internet and many people own smartphones, but service is slow and expensive.

Much of the information the public receives originates from state-run media and there are laws against criticizing government officials, in particular President Emomali Rahman. There is an independent press, but it struggles, both politically and economically, under these restrictions.

So how does podcasting make a difference? 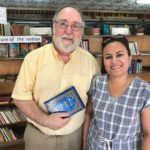 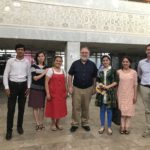 This group of young journalists helped me to record a podcast in Khujand. 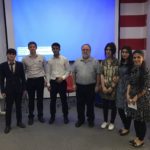 My home base for much of the trip was the American Space in the capital city of Dushanbe. I recorded several podcasts in both English and Tajik. 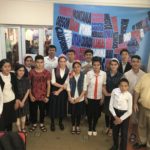 I got to talk about podcasting and being a journalist with members of the journalism club at the American Space in Isfara. 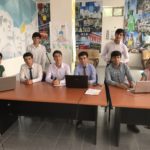 I spent a Saturday in Bokhtar recording two podcasts with students from Bohktar State University. This group recorded a conversational podcast in Tajik about things that scared them. 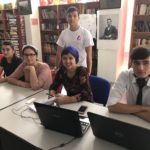 This group of students from Bokhtar State University recorded a podcast about learning to speak English.

Podcasting is a bottom-up form of storytelling. It’s cheap to produce. You don’t need a big media outlet to create or distribute it. The creator controls the content.

It’s also a personal medium. Unlike video or text which requires the audience’s full attention, podcasting is consumed passively, often alone. Audio stories consumed this way have a powerful effect on listeners, they are moved emotionally by what they hear and inspired to take action.

The students and journalists I spoke to wanted to tell stories that made a difference in their communities. Most of them had never heard a podcast before. Those that had certainly hadn’t heard one in their own language.

Part of the presentations I gave involved playing American podcasts to demonstrate the different styles of audio storytelling. However, I quickly figured out what was more meaningful for my audience was to help them create a podcast in Tajik or Russian, the second-most commonly spoken language. Once they heard their voices in that format, it all clicked.

The highlight of my trip took place in Bokhtar, where we recorded two podcasts, one in English and the other in Tajik. While the first was a simple Q&A interview, the second was a free-form conversation about what things the six participants were most afraid of. There was no structure, just six young people talking and cracking jokes. It was a true podcast.

It’s All Journalism Producer Michael O’Connell travels to Tajikistan at the invitation of the U.S. State Department’s Speakers Program to train young journalists in podcasting.

#313 — Journalists would rather have answers than mysteries