For a brief time, Charlie Specht left journalism. He took a job in politics, as many journalists do, after working at the Buffalo News.

When the movie “Spotlight” came out, the urge to return to journalism hit him hard. But not even he could’ve guessed that the story behind that movie — a team of journalists uncovering decades of sexual abuse of children by priests in Boston — would be waiting for him when he returned to the newsroom.

Specht is an investigative reporter for WKBW, the ABC affiliate in Buffalo. Since March, he’s been reporting, in three 9-minute packages on broadcast news and a handful of smaller pieces, what appears to be a decades-long cover-up of sexual abuse of children and young men by priests in the Catholic Diocese of Buffalo. 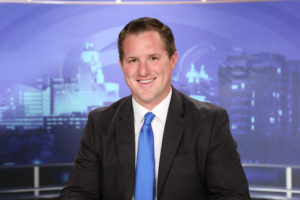 “This is a rare investigative story that we didn’t preplan things, we didn’t drop a big story to get things going,” Specht said. “This is a story that every reporter in town was working on. Michael Whalen, a regular boy from South Buffalo, had a press conference in March in front of the Diocese of Buffalo and said ‘I was sexually assaulted by a parish priest in the 1980s.’ He wanted to tell his story. It was a very simple, heartfelt story. It looked to be a one-off, if you will, a story that might last a couple days.”

That night, a reporter with the Buffalo News went to the home of Father Norbert Orsolits, the priest Whalen said abused him, and the priest admitted yes, he had abused dozens of boys over the course of decades.

Specht has worked to get in touch with victims and whistleblowers and tell their stories. He’s doing this in a town that still has deep Catholic roots and deep Irish roots, much like Boston, and a city where the 60,000 Catholics were told by previous bishops that the abuse problem in Boston didn’t exist in Buffalo.

“Whistleblowers within the church contacted us to say this isn’t a thing of the past, this is still going on,” Specht said. “They felt morally compelled to come forward. They felt like things were still being obscured from the public.”

He and his team started with the list of 42 priests published by the Catholic Diocese of Buffalo in March that the diocese admitted had been accused of sexual abuse. They looked at where those priests had been reassigned, but even as that process started, victims were calling Specht angry – their abuser was not included on the list. According to Specht’s reporting and the documents provided to him by whistleblowers, the number is in excess of 100.

The Catholic Diocese of Buffalo had been willing to talk to reporters at first but Bishop Richard Malone hasn’t answered questions in months. He’s also refusing to step down from his position.

“The response to the public, according to parishioners, has been anything but transparent,” Specht said.

On Thursday, Oct. 25, one of Specht’s whistleblower sources, Siobhan O’Connor, came forward. Previously the bishop’s secretary, she was a featured interviewed on CBS’s 60 Minutes on Sunday, Oct. 28, in a piece about the priest abuse scandal in Buffalo, along with the first member of the clergy in Buffalo to call on the bishop to resign. Specht said he’s got at least two more big stories in the works. “There’s no end in sight on this story,” he says.

Charlie Specht, an investigative reporter with WKBW in Buffalo, joins producers Michael O’Connell and  Amelia Brust to discuss his months-long work investigating accusations of sexual abuse of children and young men by priests in the Catholic Diocese of Buffalo.

#331 Investigating abuse by priests in the Catholic Diocese of Buffalo

#332 How well are journalists really listening to their audience?