As a girl growing up in the D.C. area, Xanthe Scharff learned early on the importance of writing, of taking every day experiences and putting them to paper.

Her parents, both psychoanalysts, said it was important to find time every day to write down what they’d done so someone else could learn from it.

Scharff is co-founder and executive director of the Fuller Project for International Reporting, a nonprofit organization working to increase women’s representation in media, both in the newsroom and in coverage. 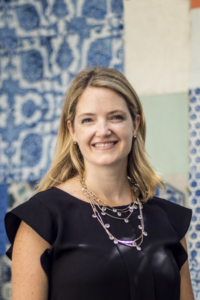 Xanthe Scharff is the U.S.
Bureau chief of the Fuller Project for International Reporting

She previously spent a decade in Malawi, first writing about families living on $1 per day, covering their financial decisions and the way they would prioritize their sons’ educations over their daughters’. After her first piece, published in the Christian Science Monitor, one family’s daughter was forced to leave school in eighth grade, while her brother continued on. Readers were so moved by the girl’s story they sent in donations, wanting to help allow girls to keep going to school and ease the burden on their parents.

After a year, she knew she could no longer report on the girls and their education, so she stopped writing about them and, instead, created AGE Africa. “I worked on that for a decade until I moved abroad. … It’s still going, serving thousands of girls in Malawi. That idea that journalism can have impact is incredibly personal to me.”

It was that effort that led Scharff to dedicate more of her life to girls’ education. “I was shocked by the way that a family where the woman was the financial head of the household would deprioritize girls,” she said. Further, when she’d sit and talk with girls about their experiences, they routinely shared similar stories about the abuse they suffered from teachers, but they did so very casually.

She started the Fuller Project with Christina Asquith, who wrote about book about the role and importance the rights of women played in international situations, from the U.S. invasion of Iraq and beyond. Both had reported on issues about women, education and policy and knew that when women step up, everyone benefits and societies become stronger.

Xanthe Scharff, co-founder and executive director of the Fuller Project for International Reporting, joins producer Michael O’Connell to discuss her belief that writing every day and sharing stories can help change lives for girls and women around the world.

#326 — Give women a voice and the world listens