Abby Lee Hood does not hide who they are.

A self-declared “leftist journo,” Hood is a Tennessee-based freelancer and creator of the Bitchin’ Pitchin’ monthly newsletter who tries to find story angles through frameworks, including making national news local and local news relatable on a national level.

Recently, they emailed a state senator on several pieces of anti-transgender legislation, something that is happening around the country.

“His response was, that’s biased, you’re an activist and you’re prejudiced because you used ‘anti-LGBTQ,’” Hood says. In their experience, “you’re going to get called an activist if you’re anything other than far right. It’s important for me to live by my personal morals.” 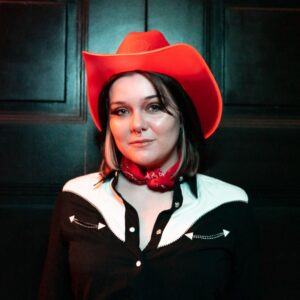 Abby Lee Hood is a freelancer who writes the Bitchin’ Pitchin’ newsletter. (Photo by Jenn Curtis)

That particular piece is an example of taking a national story with local ripples and exploring it.

“Even though it’s happening on a nationwide level, I’m always looking for how does that impact the business community here? How does that impact transgendered Tennesseans? What are the businesses in Tennessee who are donating to candidates and legislators who are pushing these bills? You can find a national story that applies to your local audience and vice versa.”

Hood says most of their freelance work comes from successful pitches, but not everything. But does the up-front identity of being a “leftist” ever hinder them from finding work, or publications willing to pay for it?

“I know my ethics and I know my morals,” Hood says. “It doesn’t concern me, but it does concern others. They’ve reached out to people I work with. … The thing about being a leftist journalist, I have lost work. People have decided not to work with me. One of the editors I work with frequently said, when I first pitched her, someone said don’t work with them because they’re an activist. I know there are people who come to my (Twitter) profile and go ‘No thank you.’ To them, I say good riddance. I’m grateful for the work I do have, I get by and I do OK. There’s a certain amount of privilege to say good riddance to those people. … I wouldn’t want to work with them anyway.”

Hood says the “leftist” tag really translates more to trying to highlight voices that might be overlooked or marginalized from other reporters.

Abby Lee Hood, a freelance writer and creator of the monthly Bitchin’ Pitchin’ newsletter, joins host Michael O’Connell to discuss tips for successful freelance pitching. They also explain what it means to be a “leftist journo” and the freedom that comes from being upfront about their morals and ethics.