Municipalities across the country have specially designated areas for dedicated uses, from airports and hospitals to mosquito abatement and commercial properties.

Why not do the same for news?

That’s what the Community Information Cooperative wants to encourage and help build. The concept, called an Info District, would create publicly funded areas for the development of local news organizations, and the people who live near and provide money for those districts would have a say in how local information is gathered and shared. 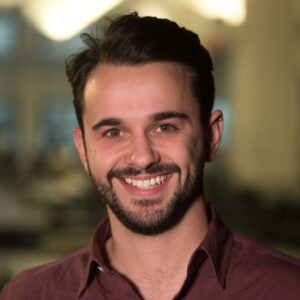 “Through the co-op, we’re trying to address the local journalism crisis at a variety of levels, including the policy level, the organizing level and on the ground, building something from scratch, what does it take to build a 21st Century news organization from the ground up,” says Simon Galperin, a founding director of the co-op. He came up with the idea of Info Districts at the City University of New York, building on a concept he’d discussed with a friend after failing to prepare for an assignment. “Focusing on infrastructure building is not what traditional journalism training gets you. At some point, and I’m not a religious guy, but at some point it does feel spiritual. It connects so much with me and the people I look at and see as my peers and allies.”

Galperin currently is putting this model to work in his hometown of Bloomfield, New Jersey, where he’s running the Bloomfield Information Project.

“We’re trying to take the lofty ideas and put them into practice,” he says. “They have an open space trust fund. That means the properties in the town get taxed at about $20 per property. The money gets pooled together and there’s a committee that helps purchase and maintain open space. New parks are built this way. There’s an existing infrastructure for civic investment in a public good. (Info Districts are) a similar concept. The governance structure is different.”

“In Bloomfield, if you taxed everyone $10 per year, that would give us a $500,000 operating budget. What we could accomplish, what a community-run organization could accomplish — I’m not sure if you want to call that  (a) small or big (budget) — it would completely change the future of Bloomfield, it would change the future of Essex County, it would improve public health, it would increase voter turnout, it would improve access to information. Having an organization dedicated to encouraging civic engagement by using journalism training, education and organizing, that’s what we need in our communities nowadays. To fund that, ad dollars aren’t going to do it.”

Simon Galperin, founding director of the Community Information Cooperative, explains the concept of an Info District. He talks with It’s All Journalism host  Michael O’Connell about how local news initiatives, funded by taxpayer dollars, can help change the future for municipalities across the country.