CNN is synonymous with hard-hitting news and an international approach to it, with correspondents around the world keeping viewers, and readers, informed about what’s happening in the world.

That’s no surprise; that’s the expectation.

The surprise is that CNN Style does much the same, but with a different entry point.

“The North Star for us is a tagline we started using internally: We put culture in context. What that means is, our mission is to help our audience make sense of the world around them through the lens of visual culture, be it art, fashion, design, architecture, beauty. That’s what informs a lot of the editorial decision-making on my end,” says Fiona Sinclair Scott, CNN Style’s global editor. 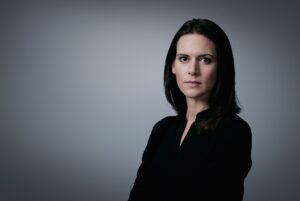 Historically, the style section of a newspaper, magazine or website might have been where “women’s issues” were discussed. But Scott says her audience is nearly evenly split between men and women.

“We do cater to women, but I wouldn’t say that our coverage is heavily focused on servicing women in particular,” she says. “We do have strong women on the team and we do strong storytelling when it comes to women’s issues, but when you look at our audience, when you break it down, it’s almost a 50/50 split in terms of gender.”

The “tiny, tiny team” was recently honored by the Alliance for Women in Media with a Gracie Award for the best Information/Entertainment Website, something Scott calls a “huge honor. It’s just really great to be recognized by an organization that champions women in particular. It’s such a credit to the team.”

One of the three staff members of the team, Stephy Chung, is the driving force behind CNN Style’s ambitious Hyphenated series.

“It’s a deeply personal series for Stephy. She’s an Asian American. We decided to launch Hyphenated with a focus on the Asian-American experience. She came to me, very clearly, with an idea for the series and was very straight with me,” Scott says. “She said the anti-Asian sentiment and violence we’re seeing in America right now is really worrying. It’s getting worse and the media isn’t covering it the way it should. We need to do something about it.”

Everything covered in Style is really about something else, she says.

“OK, this is a pitch about photography or a new exhibit opening, but is it about more than that? That’s really, as I’ve come to learn, what interests our audience. We have to think of our audience in a digital space. We’re very data-driven and we have to think about what will resonate with our audience based on the data we’re looking at every day.”

The average CNN viewer and reader isn’t looking for content that would traditionally be found in the style section. “That’s about going, hey, listen, I know you don’t care about design, but this isn’t about design. It’s about something else. It’s about embracing intersectionalities and the interplay between subject areas. We think about fashion and the climate crisis. We think about beauty and identity. We think about art and representation. It’s there, it’s in those intersections, we do something I hope people find to be unique and compelling.”

Fiona Sinclair Scott, CNN Style’s global editor, says everything going on in politics and news around the world is connected to cultural expressions, including fashion, art and design. She talks with It’s All Journalism host Michael O’Connell about these intersectionalities and why Style is not just for traditional “women’s interests.”

Mental health toolkit designed by and for student journalists