Noema is the ancient Greek word for thinking, something Noema magazine’s editors take to heart.

Kathleen Miles has been the executive editor for Noema magazine, a publication of the Berggruen Institute, from its previous iteration as World Post, a product that ran as a partnership first with the Huffington Post and, later, the Washington Post. 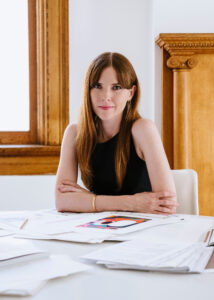 “With Noema, what we wanted to do more of, and what we’ve been able to do more of now, is more long-form and ideas-based content less pegged to a 24-hour news cycle and with a longer shelf life,” Miles says.

The idea of thinking big thoughts and collecting information from a wide variety of sources is in keeping with Miles’ career: She admits to not wanting to get into journalism right away because she wanted to have “more breadth to my career.”

Before joining World Post, Miles worked as a political action coordinator during the presidential candidacy of John Kerry for the International Ironworkers; investigated unfair labor practices for the National Labor Relations Board and served as an inner city English, history and humanities teacher for Teach for America.

“I loved them all but I didn’t quite want to commit to one for the long haul because I had too many interests,” she says.

With Noema, Miles is working with like-minded writers and editors who want to take the time to explore topics and ideas that might otherwise be siloed in academic journals and, by default, less accessible to people outside those worlds.

“By covering overlapping fields, everything from philosophy to economics to politics and technology, our aim is to get out of the usual lanes and cross those disciplines and cultural silos,” Miles says. “We publish a lot of academics and have a lot of academic readers, but that’s not all we are.”

Academic journals tend to “silo disciplines,” Milos says. “Philosophers tend to publish in and read philosophy journals. Biologists tend to read and publish in biology journals. We’re aiming to capture some of the most innovative and unnoticed ideas in those academic and cross-disciplinary spaces and make them more accessible to a wider audience.”

Noema also wants to include different approaches to considering policy ideas, including pieces of cli-fi, or climate-change fiction, and has started to include pieces of science fiction as well.

“I’m looking to publish more science fiction stories that specifically only go out one to 10 years, instead of 500 years out, where you’re making these wild imaginative guesses rather than an informed prediction or a possibility in the near term,” Miles says. “We had a writer who had an innovative idea for data policy. Instead of describing what it should look like, he pretended he was writing a year in the future and described what it does look like. This kind of writing lets you play out policy proposals so people can actually imagine and see what you’re envisioning through, often, a fictional character who has lived it or is living it.”

And with an audience that includes heads of state in addition to academics and policy makers, the content within Noema’s pages reaches “people who are actually in a position to take some of the ideas and policy prescriptions we publish and run with them.”

Kathleen Miles is the executive editor of Noema, a cross-disciplinary academic  magazine from the Berggruen Institute. She talks with It’s All Journalism host Michael O’Connell about the importance of breaking out of the 24-hour news cycle to give writers the room to investigate deeper topics to help decision-makers approach policy discussions.

483. Data can be the spine of your reporting