Baltimore is getting its second new, news outlet this year, with an eye squarely on the Black population.

The Baltimore Beat is making something of a return, led by Brandon Soderberg and Lisa Snowden, former colleagues at the Baltimore City Paper before it closed a few years back. The Beat was an online news organization previously but shuddered when the original funder abruptly divested. 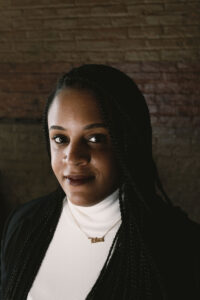 Lisa Snowden is the editor of the Baltimore Beat.

“The work we were doing, the niche we were working in, focusing on Baltimore’s 60 percent Black population in ways other, more mainstream outlets, weren’t doing, was needed,” Snowden says. They heard of other reporters who had lost their jobs deciding to try nonprofit status to start news organizations and decided to give it a try. “We re-launched as a digital only, nonprofit newsroom, and we did that for a little while, but then life happened. The pandemic happened.”

It was during the pandemic that Soderberg and Snowden were contacted by the Lillian Holofcener Charitable Foundation, run by a white family from Baltimore who had been giving piecemeal donations to organizations through grants.

“Because of the racial disparities highlighted by the pandemic and after the death of George Floyd, they said, ‘We feel we want to do more. We want to divest totally and give money to a Black organization,’ and that was the Baltimore Beat,” Snowden says.

Snowden, serving as the editor-in-chief, is happy to be sharing the spotlight with the Banner.

“This is the most Black journalists I’ve seen working in Baltimore City and that’s nothing but a good thing,” she says. “One of the reasons I do the work I do, and felt we needed to start the Beat, is we need a place for Black journalists. The lane (the Banner) is trying to fill is mainstream. I don’t think they’re the Sun, but they’re filling the mainstream need for general news. For me, it’s still very important to have a Black-led paper focused on the needs of Black people. That’s where we are.”

In the first few issues — the Beat will be published every other week — reporters are taking longer looks into a handful of topics, including “divestment, the way Black people are driven out of their property sometimes. There’s so much to talk about with this pandemic and the way it’s affected Black populations in a very specific and detrimental way. Black people got sicker, Black people took a harder financial hit. … Baltimore’s a very segmented city. There’s poverty and then there’s vast wealth. We’re looking at how the people who were already poor, how they’re going to fare in the post-pandemic world.”

Now that she and Soderberg are ready to start printing again, Snowden has a clear goal in mind.

“We have a staff of four. We’re not only producing content and making sure it’s quality and good and out on time, but making sure it goes to the printer on time and making sure it’s picked up on time,” she says. “My goal for the year is to figure out how to do the things we’re supposed to do and do them well. We talk about ourselves like we’re a food truck. A food truck maybe has like 10 things. They do those things well and that’s it. We’re not breaking news. That’s not what we’re going to do right now. But we can give you a thoughtful take on the news, a deep dive on things that have been in the news, and that’s all we’re trying to do right now.”

While much of the journalism talk in Baltimore has been about the Banner, the Baltimore Beat returned as a biweekly print newspaper on Wednesday . Editor-in- Chief Lisa Snowden shares how the Beat plans to tell the stories of this majority Black city with It’s All Journalism host Michael O’Connell.

530. How satisfied are journalists with the job they’re doing?