On the morning of Jan. 6, 2021, Tia Mitchell looked out an east-facing window of the U.S. Capitol complex and saw a couple hundred protesters outside the Supreme Court, standing behind fencing.

“I didn’t know at that exact moment, if I had looked out of the west side, I would’ve seen the marchers heading toward the Capitol,” says Mitchell, the Washington correspondent for The Atlanta Journal Constitution. 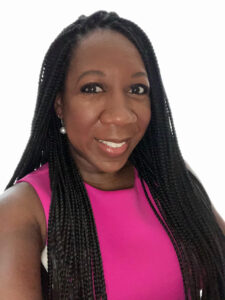 Tia Mitchell is the Washington correspondent of The Atlanta Journal Constitution.

Mitchell has been in her position since late 2019 and was in the gallery to watch the joint session of Congress work through the process of certifying results of the 2020 presidential election. She knew the Georgia delegation had the votes within their membership alone to challenge the results and was paying close attention when then-Vice President Mike Pence started the process by calling on the delegation from Arizona. That membership also had the support in both the House and Senate to challenge, prompting a two-hour debate in each respective chamber of the legislative body.

“Georgia was going to be the second state to go through this process. What sticks out to me that day is, in hindsight, knowing what was happening at the time, they spent over an hour on the floor debating as if nothing was happening outside,” Mitchell says. “It was a regular debate. Each side has an hour and they go back and forth. It was very routine. The first indication that something was off was there was a lockdown at a nearby office building in the Capitol complex. Not a lot of details. That was the first, OK, there’s a security issue, things aren’t quite right.”

Mitchell remained in contact with her editors in Georgia but nothing seemed amiss until security guards came in and removed key members of Congress who are part of the order of succession, people who would be in line to take over the presidency should something happen to the president.

“That’s when you could tell members of Congress were starting to get text messages,” she says. “People were shouting, ‘Tell Trump to send your people home,’ tempers were starting to flare. The debate had to stop.”

A short time later, things escalated again, when members of the security team notified the room that members of Congress had gas masks under their seats and to put them on, as people had breached the Rotunda and tear gas might have to be used.

“We couldn’t see in the gallery what was going on. When they said there were people in the Rotunda, I’m thinking maybe a couple people. Maybe a dozen people being wild and crazy,” Mitchell says. After all, the Capitol had been closed to the public for nearly a year due to the pandemic.

Tia Mitchell is the Washington correspondent for The Atlanta Journal Constitution and chair of the National Association of Black Journalists’ Political Task Force. She was in the U.S. Capitol on Jan. 6, 2021 and tells It’s All Jouranlism about a day that quickly got out of hand.