Investigative reporters get a lot of credit for the amount of time they dedicate to pursuing a story. But how many are willing to go full Monty in a nudist camp with their photographer and, later, spend five weeks preparing to make their drag show debut? 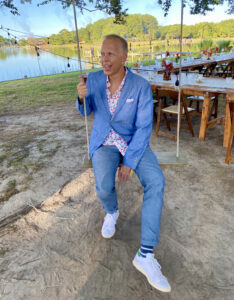 Billy Warden believes that to tell a story well, it’s best to put himself in the thick of it and show readers what happened from the inside out.

“I’m just nosy, I guess,” says Warden, a Raleigh-based marketing executive at GBW Strategies, when asked how he first became interested in journalism. “I became a journalist, which is my first love and the greatest job anybody can have, because I was just so curious all the time about what makes people tick and what people are doing and why they’re doing it.”

He credits the Gonzo style of Rolling Stone writer Hunter Thompson for his interest in writing first-person narrative stories and immersing himself into the world about which he’s writing.

“One of my favorites was entering the pro wrasslin’ ring,” he says. While he didn’t don the spandex to get into the ring, he spent time working with a wrestler as a manager. His approach: “I will be one of those evil genius managers whose job it is to get the crowd so angry that it becomes a distraction to the referee so that the bad guy wrestler I represent can sabotage the good guy and win the match. That’s what we did. It was fascinating, for your job to be, I’m going to make all the people in this big room so upset they want to tear me limb from limb. That’s not what most of us do during the day.”

The same is true of joining a nudist colony. He first had to win over the groups he wanted to visit, convincing them that his was a genuine interest in their way of life and not a means to an end to treat their lifestyle as a joke.

“You have to overcome that first line of ‘I don’t know.’ I have found that the best way to do that is sincere deep interest in how this person is living his or her life and how they came to their particular vocation or passion. To go in as a good actor in this, wanting to share with the rest of the world what it’s like for a fellow outsider,” Warden says.

That’s what led him to spending five weeks with Kayla LaShay, a long-time drag performer who became Warden’s drag mother as he went through training to perform as a drag queen for what sounds like a first and only show.

“I wanted to do this story because, for one thing, to go back, clearly drag is a pop culture phenomenon. That makes it easier to take to the editor and say this is something I want to try, all the readers will have heard of this and may be intrigued and want to know more about it,” he says. “I feel like in North Carolina there’s been some controversy about acceptance of the LGBTQ community and I felt like I wanted to do a piece where I can get close to some folks in this community and explore their world in a way that is interesting and allows other people to enter that world too.”

When he started the story, his intent was to have the climax of the piece be the moment he hit the stage, but instead the story’s emotional core happened long after the mascara and heels came off.

A man came up to Warden at a party and pulled up a photo on his phone of the drag performance. “I was trying to brush him off, I didn’t want to relive it all. He put his phone away and said, ‘Y’know, I just want to say that I love Kayla and when I first came out, or was thinking of coming out, I didn’t want anything to do with drag queens. I didn’t want anyone to associate me with the fringe. Until I started going to the shows and I was just amazed by their confidence. They were being who they wanted to be and it totally changed me. I go to all the shows now. Good job giving it a try.’ That became the end. To me, that was like yeah, yes!”

Billy Warden is a Raleigh-based marketing executive, writer and musician. He specializes in writing features from a first-person, immersive perspective. He shares what it’s like reporting from inside a nudist community and as a performer in a drag queen review.