Newsrooms have been talking about the need for more diverse voices and perspectives for years, but Sisi Wei was tired of just talking. 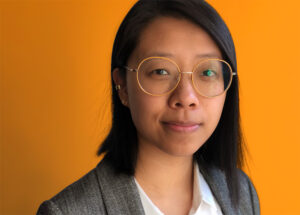 She joined OpenNews as co-executive director in March 2020 after working at Pro Publica, eager to help effect change across the journalism industry. “One of the things I was interested in exploring was what gaps exist in supporting journalists of color. When I first stepped into the job, we were having conversations all year. Then summer of 2020 arrived and the Black Lives Matter movement is all over the United States and beyond. Journalism specifically had a reaction to that and people cared more about issues in a way I had never seen. There was a sudden change for me in the language I was able to use to describe what was going on.”

No longer was “diversity” the only word in her toolbox. Now she felt empowered and better equipped to talk about the deeper underlying issues of better representation in newsrooms and in stories, in addition to being anti-racist and anti-racism not just in coverage but as a pro-active stance in reporting.

“Out of that summer came our DEI (diversity, equity and inclusion) Coalition,” Wei says. She put out an open invitation: “‘If you’re interested in this, work on this space with me. If you think it would be productive to gather, share knowledge, advice and support, whether just in a newsroom, as a freelancer, as an individual, any space you have, if you want to do this, let’s do it together.’ We ended up with 100 active volunteers across the U.S. We worked for a couple months together to figure out what kind of space do we need, what’s the code of conduct, how do we want to do this. After a couple months, the Slack channel launched in March 2021.”

Slack seemed an ideal space for the DEI Coalition, because it was a tool most newsrooms had incorporated as a mode of communication during the early stages of the pandemic when reporters were sent home. It’s an easy way for people to share ideas, concerns, questions and have conversations in a safe and supportive way, but Wei says there was some debate about whether it was the best option. “Our main concern was, is it safe enough. Your boss isn’t able to come in and see what you say, or could someone subpoena us. We explored the legal conversation. We decided Slack was totally fine for this purpose. We also have a policy that, after 60 days, messages are automatically deleted.”

The DEI Coalition offers advice, guidance and a safe space to talk. Any journalist — whether full-time, freelance or other — can request access to the Slack channel by going to OpenNews.Org and clicking the DEI Coalition tab on the homepage. “There are volunteers who are part of the coalition Slack and look at it every day. Once they have time to review and make sure you’re a real person, they send you an invite to your email and you can join right away,” she says.

In addition to talking about matters of diversity, equity and inclusion, the group offers a space to talk about work-life balance, the importance of mental health care, pay equity, even providing access to financial support opportunities for mental health care.

Sisi Wei is co-executive director of OpenNews, which is helping to build more equitable future for journalism. In March, OpenNews marked the one year anniversary of the DEI Coalition for anti-racist, equitable and just newsrooms.