After years of covering the Trump presidency, Andrea Bernstein thought things were wrapping up. She and a group of other journalists were tracking the then-president’s business dealings while in the Oval Office. They had completed 75 episodes of their podcast, Trump, Inc. for WYNC.

“The last one we were editing on Jan. 6, 2021, when notices and tweets started popping up saying the Capitol was under attack,” Bernstein says. 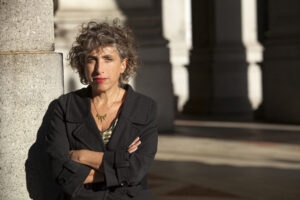 The news was shocking but not all that surprising. “I think that we had covered all of the ways that Trump had busted through norms. The normal structures placed on him, he would bust right through again and again. We were trying to figure out how this transition was going to go. Was he going to do the normal transition things people do? We were trying to game it out. I don’t think ‘attack the Capitol’ was on anyone’s list, even though, in retrospect, there were many, many warning signs.”

Out of that day of chaos, confusion and insurrection, Bernstein and co-producer Ilya Marritz produced another podcast, Will Be Wild, which includes three special episodes about the Select Committee to Investigate the January 6th Attack on the United States Capitol.

Among the warning signs that should have been heeded, or at least recognized earlier as a sign of things to come, was the uptick in white supremacist activity and rhetoric on social media.

“These issues were not issues that started being challenging for the government under President Trump. Previous presidents had grappled with it. Obama had grappled with how far to go in confronting domestic extremism and a lot of people felt he had come up short,” Bernstein says.

In their research for Will Be Wild, Bernstein and Marritz learned how specialists and experts were routinely told by their supervisors not to pursue or report information on how white supremacist activity increased during the Trump administration.

“Usually under Republican presidents, white supremacist activity goes down. Under Trump, it went up and it was fanned by Trump. His own Department of Homeland Security officials recognized the pattern and were undermined, were blocked, had reports killed, were fired, were explicitly told do not investigate this because it will hurt the president,” Bernstein says. “To show he meant it, Trump kept the entire top leadership destabilized. On Jan. 5, he was on his fifth acting undersecretary of the Department of Homeland Security. People understood he would be very inclined to move leadership around if he didn’t like what people were doing. What these experts we spoke to said they kept trying to confront the threat and they were told very directly … not to do this.”

Andrea Bernstein and Ilya Marritz had already explored the presidency of Donald Trump with their Trump, Inc. podcast for WNYC, but the events of Jan. 6, 2021 showed there was more to the story. Bernstein talks to It’s All Journalism host Michael O’Connell about Will Be Wild, which examines what led up to the insurrection at the U.S. Capitol.

524. How hybrid journalism brings academic expertise to the masses