Many journalists will say they started their career working for their high school, or middle school, newspaper.

Oliver Tam, Georgia Russello and Cristina Steffanizi are high school students who work for their town’s newspaper, the Pelham Examiner, a publication staffed fully by other students. 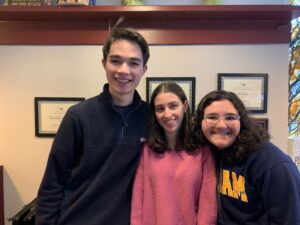 The Pelham Examiner was born in 2018 after the News of Pelham, a twice-weekly publication, went under.

The school still has a newspaper, but the Examiner’s coverage goes well beyond what that publication can do.

“What differentiates us is we can cover sensitive topics in the town, like racism or problems with the school board of government officials, anything of that sort that would be taboo for the school paper that wants to put the town in a positive light,” says Cristina, the Examiner’s deputy managing editor.

Earlier this year, a message posted on Snapchat suggested there might be a violent attack on the school. “Basically, the high school newspaper … they come out with a print edition but it covers big events in the school, but there’s no way the school paper could get such a hot topic, and so controversial, immediately out. When we heard about it, we had reporters looking at classrooms to see how many people were out” because the expectation was that the attack would happen that day, explains Oliver, the Examiner’s executive editor. “The Examiner was able to gather what was happening from Snapchat and emails the school was sending out. That, in my opinion, is a prime example of how the Examiner can really be used in that way, as opposed to another paper that can’t act as fast.”

The journalists might still be juggling high school assignments with their responsibilities to the paper, but they’ve proven themselves serious about their work and have earned the respect and trust of local officials, including those at the school.

“We email with the school’s district coordinator. We have a pretty good email relationship in terms of getting information on school stuff,” says Georgia, the Examiner’s managing editor. “I haven’t had that many issues in terms of people in town not taking us seriously.”

They credit their mentor and one of the paper’s creators, Rich Zahradnik (or Z or Mr. Z), a long-time industry professional and author, for helping them organize and run the paper, but he makes sure the students know they’re in charge.

“Mr. Z is an extremely instrumental part of the paper,” Oliver says. “He helps to rewrite press releases we can’t get to sometimes because we’re too swamped with work. The main thing I’ve gotten from Mr. Z is that he’s a bit of a mentor for a lot of us. I’ve learned a ridiculous amount … from him.”

“The Examiner is a big learning experience for all of us,” Georgia adds. “Because it’s all students, none of us have a background in journalism. I’ve learned so much and that’s a big part of it, learning from him how to run a paper.”