Discussions of journalism and the news of the day were always staples of Ed Madison’s life. His father was the first African-American to join the editorial staff of the Chicago Tribune after working as a reporter for that publication for many years.

In his new book, Madison, an assistant professor and media partnership coordinator at the University of Oregon, uses that perspective to take a critical glance of the state of journalism today and what went wrong – or what might still be working properly. 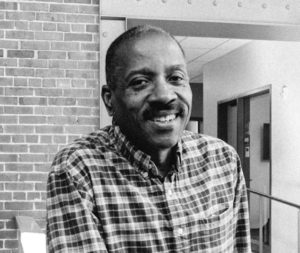 Ed Madison is an assistant professor at the University of Oregon.

The book, Reimagining journalism in a post-truth world: How late-night comedians, internet trolls, and savvy reporters are transforming news, is the result of two years’ work with Ben DeJarnette.

The original manuscript was due right around the time of the November 2016 presidential election.

They got a six-month extension.

“After that happened, it shifted how we all reimagined journalism at this point,” Madison said. “Some politicians don’t like the watchdog role journalism plays in society, but (the industry has) never been under attack on a daily basis as it has been in this administration currently. It was timely and, perhaps, fortuitous for this to come out now, but it’s a little bit of a different take than we had initially imagined.”

The public isn’t overly fond of journalists and the work they do, he says, citing the statistic that 32 percent of people say trust the media. Still, “when there’s a catastrophe or grave incident that happens, people tend to go to legacy media outlets that are tried and true — the New York Times, CNN, NPR. That continues to be the case.”

In discussions with his students, Madison said he’ll ask them why they repeatedly shop at a certain store, or why they frequent a particular restaurant. It comes down to reliability and consistency, the same reason people return to the same media outlets in times of big developments.

“I think that’s the same way we should look at news and information,” said Madison, who “doesn’t engage” with terms like fake news because it lends itself too easily to “ideological conversations about the legitimacy of mainstream media compared to other types of organizations.”

People turn to legacy media outlets they’ve learned to trust because “there are organizations that have built a track record and there are reasons for that. Their leaders are conscientious about protecting the integrity of what they do,” he said.

Ed Madison, an assistant professor of journalism at the University of Oregon and author of a new book, Reimagining journalism in a post-truth world: How late-night comedians, internet trolls, and savvy reporters are transforming news, joins producer Michael O’Connell to explain why terms like “fake news” aren’t worth acknowledging and how writing cue cards for Mike Douglas made him a better producer.

#299 — Can journalism survive in a post-truth world?

When should we end the podcast?