What happens in darkness does not tend to stay there long.

“We’ve seen which parts of our systems are or are not working,” said Alex Howard, an independent writer, open government advocate and former deputy director of the Sunlight Foundation.

It’s not just about the U.S. government system, or state and local leadership. It’s about big things and little things happening domestically as well as internationally and the response to actions taken by both those in power and those who are in a position to act, regardless of how big or small a response might be. 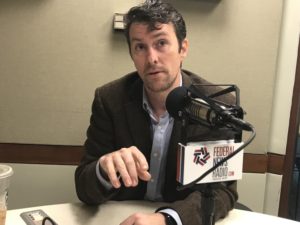 Certainly the 2016 presidential election, and everything that’s happened since, kicked off a chain reaction that has some in the U.S. wondering whether the democracy established here is working as effectively as the laws require.

Journalism is responding in powerful and meaningful ways, with the Washington Post and New York Times both recently winning Pulitzer Prizes for their coverage of less-than-legal dealings by those in positions of power, or trying to win elected office.

“The Judicial branch, the judiciary has done a good job correcting unconstitutional actions or behaviors, orders by the Executive (branch), but Congress has failed, I think, in many senses, to do its oversight job,” he said. “Now I think we’re going to see whether the ultimate corrective is going to part of the conversation, which is to say whether the American people will vote to put different people in (office) who will perform the jobs they are supposed to be doing.”

But there’s also a more immediate and social element to illegal activity and hypocrisy among the governing against the governed. Howard mentions a woman “violently arrested at a Waffle House,” an incident captured on a smartphone camera and shared on social media. That incident happened just a few days after the highly publicized incident where two African American men were in a Starbucks, waiting for a friend, and the police were called on them.

“We’ve seen example after example of different places where people are interacting with representatives of the state, trying to attend public meetings, trying to see how their government is trying to conduct itself in public,” Howard said. “I think it would be wrong to say that hasn’t had a corrective on our understanding of the experiences of our fellow Americans and people around the world.”

Transparency in action, in governance and in the press “needs to happen for the big goal of many people in this space to work out, which is to restore trust in government, restore trust in institutions, which is at historic lows,” he said. “That requires institutions and individuals, politicians, civil servants, at every level of government being transparent about things they might not to be.”

Alex Howard, open government advocate and former deputy director of the Sunlight Foundation, shares some illuminating thoughts with producer Michael O’Connell about the importance of holding those in power accountable and the role of media in bringing shady intentions and actions into the light.

304 — Fighting for truth through transparency and sunlight