Lee Uehara had every intention of going back to Chicago and making the monthly Japanese and English newspaper she ran into a stronger, better publication.

After finishing up journalism school at Columbia, however, she landed an internship and then a job with the Associate Press, moving to North Carolina before coming back to New York City for a few years before going into teaching. 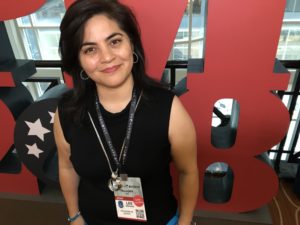 “I found I love to share information and teach. Combining journalism and publishing with education was a match made in heaven for me,” said Uehara, host of The House of Lee NYC podcast.

Her podcast is relatively new and she’s still working to establish the kind of consistency that will help reach more people and build her credibility, but it’s a simple, straightforward concept: “House of Lee NYC is where listeners can come on in and meet folks doing interesting things and get tips for resourceful living. A lot of podcasters seem to think they have to only interview famous people. For me, that is a risk I do not want. I believe there’s inherent worth in every single person and every single person has wisdom and tips to share, just from being on the planet.”

Uehara also runs a family events business, which involves sending out press releases. Given her journalism background, she’s surprised that she rarely gets follow-up calls to confirm information. That’s a symptom of “lazy journalism” she does not stand for.

In her podcast, she once interviewed a woman who had been an atheist before starting a small church in Brooklyn. In the course of their conversation, the guest mentioned that the idea of community is so important, even the astronauts were invested in it to the point where they asked for a table for their rocket.

“I called up NASA and it took me a while to follow the trail and maze to get confirmation that, yes, astronauts did request a table, but it was for the International Space Station,” not the rocket that would take them there, she says. To incorporate that small clarification, Uehara inserted a voiceover into the interview to set things clear.

Just because a podcast isn’t a traditional form of journalism doesn’t mean some of the basic standards of accuracy, fact-checking and being responsible for errors can fall by the wayside, she said.

Lee Uehara of The House of Lee NYC podcast joins producer Michael O’Connell this week to discuss the inherent wisdom that comes from walking around on the planet and living your life, the importance of picking up a phone to fact check and why journalistic standards are essential for podcasts.

#319 — Sometimes you have to call NASA about a table