The financial world is confusing enough for most people, including journalists, to try and understand. Bears, bulls, highs, lows, stocks, bonds; it’s a lot to try and comprehend and it’s very easy to be intimidated.

Throw cryptocurrency and blockchain and Bitcoin and Etherium into the mix and it’s all the more complicated.

Camila Russo didn’t set out to be a financial journalist but taking a finance class during her masters program at Northwestern introduced her to that world, one she quickly found she loved. 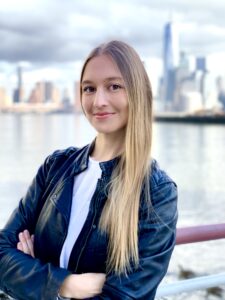 Camila Russo is a financial journalist and current editor of The Defiant.

“I actually enjoyed reporting on that side of things rather than politics and foreign policy,” she says. “From there, I realized this was an interesting career path. I applied for a Bloomberg internship, stayed there for eight years and that shaped me as a financial journalist.”

There’s a kind of objective truth in writing about financial matters that isn’t possible in other kinds of journalism, according to Russo.

“You’re reporting on numbers, things you can quantify and prove,” she says. “I started to realize the market provides us a more objective way of looking at things. A price is the condensation of thousands of things. The price of a company’s stock, whether it’s going up or down, it’s reflecting the opinion of thousands of investors around the world. The same with government bonds. Bonds from Argentina have super high yields; that’s a way of saying the policies its government is doing is impacting the country in a negative way. That’s more objective than finding analysts to comment on a story. You can show with numbers what’s going on with a country or a company.”

Russo is the founder and current editor for The Defiant, a business news site, newsletter, and podcast about decentralized finance, primarily focusing on the rapidly expanding world of blockchain cryptocurrencies.

“Blockchains are decentralized and distributed networks,” Russo says. “This means they are networks of people who are running a software all over the world and there’s no hierarchy to those individuals, who are nodes of the network. It’s this system not run by a central party, it’s run by nodes running a software globally. These participants are incentivized in currency. Cryptocurrency, the way it’s produced involves a lot of cryptography, so that’s basically it. Networks and participants of the network are incentivized to run and confirm transactions in the network by earning cryptocurrency.”

The first cryptocurrency was Bitcoin, followed by the Ethereum blockchain and its currency, Ether, and now there are others, including DogeCoin, a cryptocurrency that started as a joke “underpinned by a meme that Elon Musk tweeted,” Russo says.

Camila Russo is the founder and current editor of The Defiant, a business news site, newsletter, and podcast about decentralized finance. She talks with It’s All Journalism host Michael O’Connell about the clarity of financial reporting and explains how blockchains work.

The Defiant breaks down cryptocurrency