Imagine being a student journalist, working on a daily publication with real, hard-and-fast deadlines, when your school becomes the middle of an enrollment scandal.

For Eileen Toh, Natalie Bettendorf and their colleagues at theUniversity of Southern California’s Daily Trojan, it turned into a nonstop series of breaking news stories on top of school work and assignments.

Unfortunately, it was also the beginning of a time of tremendous mental health stress and emotional challenges. By the end of that year, nine USC students had died, some by suicide and some by other causes, and everyone was feeling the strain. 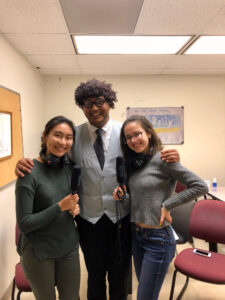 Bettendorf and her close friend, Karan Nevatia, started working together to create a wellness initiative at the paper.

“Mental health in the journalistic space was something he was really passionate about,” she says. “He said we could make this new position of a wellness director and they could focus on how to make newsrooms a healthier space. That summer we worked really closely together on developing this new program. I think that’s when I really started developing my interest in mental health and reporting on mental health.”

Nevatia learned about a memorial scholarship for USC students, in which they could propose grants for spaces in mental health. He wanted to create a toolkit for journalists — not just students but anyone who worked in news, anywhere — to help have resources available online to be able to take care of themselves.

Sadly, he died by suicide in September 2020. His friends felt compelled to see his vision be made real. They are now the co-founders and leaders of the Student Journalism Wellness Project.

“We have a number of resources available. Some are contacts for help, like the national suicide hotline, the Trevor Project hotline, a contact number for USC students. We also have stuff from the Daily Trojan, stuff from other student newsrooms and papers and other reporting we’ve seen on mental health in student journalism or journalism in general,” Toh says.

They included one of Nevatia’s columns, one they say helped the newsroom realize their own mental health as a collective was being taxed because of the built-in compulsions to work hard and not take breaks in the name of news.

“He talked about the newsroom needing to prioritize journalists’ well-being in order to prevent burnout,” Toh says. “This was the first time I think all of us, as a staff, realized this is a problem we’re facing too. … As we were editing that story, we were surprised. This is something we have to collectively address. This column was something really close to my heart.”

The toolkit also includes a letter Bettendorf wrote to, and from, the paper’s editorial board.

“At the beginning of the Fall 2019 semester, I was laying out all these things Karan and I had been discussing about launching the wellness initiative. One of the things in the letter is the goal for the initiative to not only be external — we wanted to put more context about mental health and cover issues on campus that address well-being — but also internal, within our newsroom. How are we taking care of our staff? We understood that to put out the best content we had, we had to take care of ourselves. How can we keep a sustainable model within our newsroom? For me, that was something that was really important to put up on the site because it was the guidelines for thinking about this initiative.”

Eileen Toh and Natalie Bettendorf are two of the leaders and co-founders of the University of Southern California’s Student Journalism Wellness Project, an online resource kit for journalists to help handle the stress and mental health obstacles that come from working in news. They tell It’s All Journalism host Michael O’Connell about the importance of the project and their friend, Karan Nevatia, who started the initiative before dying by suicide in 2020.

Mental health toolkit designed by and for student journalists

Pushed Out: How domestic violence can lead to homelessness