Christopher Post had a 20-year career in emergency response, working in public safety, fire and emergency medical services before trading the ambulance for the news vehicle. Now he’s a video journalist in Allentown, Pennsylvania, but he wants to use his training to help keep reporters safe.

“I tell a lot of younger journalists, I learned how to ask questions in the back of an ambulance,” Post says. “That’s where I honed my skills to interview somebody and try to find out what happened. I love being able to do that, to talk to people.” 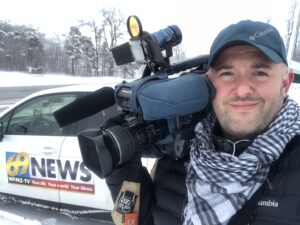 Christoper Post is a former EMT who is now a video journalist with WFMZ in Allentown, Pennsylvania.

Post’s background means that, in addition to camera gear and extra batteries, he keeps a first aid kit in his news vehicle and credits at $15 pair of rubber boots he picked up at a farm supply store as an integral part of his work equipment. They came in handy recently when he covered flooding and storm damage from Hurricane Ida.

At the heart of his job, now as in the past, is safety and being aware of his surroundings. While first responders are trained in situational awareness, watching for high-stress situations or unsafe environments that might create new problems, it’s not something for which journalists receive training.

“The rules have changed in the last few years with how journalists are looked at and the threats toward journalists are different,” he says. “They’re different than they were a few years ago. I always take into consideration safety. As I was getting ready today, I put fresh batteries into a flashlight. I try to do things that are proactive versus reactive to make sure I’m successful when I go to work tonight. It used to be international journalists that took safety (training) and we gotta go off to the training program, but the reality is, safety is very much domestic as it is international. We should look at it that way.”

Recently, Chris added a number of safety precautions to his Twitter feed, to help journalists  covering weather emergencies, including flooding from hurricanes.

“You shouldn’t be wading around barefoot or in flip flops in floodwater,” Post says, as an example. That water could be filled with bacteria from dead animals, “raw sewage to fuel oil to all sorts of stuff. Safety is always on my mind.”

“When you see something that seems out of place, you can make a decision about what’s next,” Post says.” Be one step ahead of someone who might want to do you harm. I drive a vehicle with my station’s name on it. Sometimes it’s great, sometimes it’s not. Moreso not. I could be sitting at the traffic light waiting to make a turn and someone toots their horn and flips me the bird. It’s crazy. I stop at the convenience store to get a drink and someone’s yelling at me, accusing me of being fake news.”

Journalists at every level should learn these skills — not only will it keep them safe, it can help them prolong their careers.

“I wish the industry would have taken safety concerns more seriously a lot sooner,” Post says. “I look at friends of ours, journalists that get burned out. I hear how did it get to this point. It’s because I was dealing with this situation or that situation or this other situation. They were all really hard things. The way you can be resilient to those things is to be prepared for it.”

Christopher Post spent 20 years as a first responder before changing careers and becoming a video journalist. He talks with It’s All Journalism host Michael O’Connell about how journalists can develop situational awareness and be safe when covering potentially dangerous stories.

Journalist pals, here are some tips for covering a hurricane. This is best practices of 20+ years of being in disaster zones, Any questions? — Hurricane season runs from June 1st to November 30th every year, @NPPA @RTDNA @spj_tweets

Keeping journalists safe is a priority for former EMT