Michael Hainsworth is a future-embracing, self-proclaimed geek who wanted to be a radio guy, became a TV guy and is now a digital guy in every sense of the word.

On his first podcast with a friend, Hainsworth used a pseudonyms because the broadcaster he worked for wouldn’t have given permission for the show. It might’ve been seen as a threat.

The reason for that?

“Mainstream media is scared to death of digital,” Hainsworth says. “It always has been, it continues to be. It had to be dragged, kicking and screaming, into the 20th century, let alone the 21st. I didn’t bother to ask my employer if I could launch a podcast, I just did it. I cut my teeth on that and learned a lot about the nature of podcasting. At the end of the day, it’s an industry that is unaware of how to monetize it and fearful of not possessing control over the final product.”

Hainsworth, based in Toronto, tried to move his financial broadcast network, or at least his show forward by suggesting some changes to streamline the presentation of critical information to viewers. 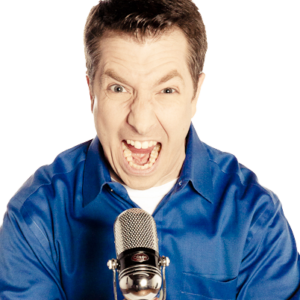 “While financial television is very charts- and graphs-oriented, you can strip the video off almost every single show and turn it into a podcast,” he says. “There was no interest in doing that because they couldn’t figure out how to monetize it.”

The jumping-off point came when Hainsworth made suggestions about changing the way the broadcast looked. He was working with a bad producer and a bad director and wanted to go back to sitting at the anchor desk, providing valuable information and cutting away, for starters, the animated introduction to the broadcast.

“I said ‘Let’s get right to the show and let’s do it for mobile,’” he recalls. “All these ideas, I turned to my boss and presented them and he said that’s all well and good but we have to make TV for TV. I realized I had to jump ship and reinvent myself for digital before all my hair was gray and no one believed I knew what I was talking about.”

Hainsworth points to an old concept, the “ice cream moment,” something that radio stations in particular used to program for.

“The idea being that you’re on the way home from the store, you’ve got the quart of ice cream in the trunk, but you’re listening to the radio and you’re in the driveway and the content is so engaging you have to sit there, idling, because you don’t want to miss a thing. That doesn’t exist in the digital era anymore. It changes the way we program tremendously.”

The same goes for the premise that radio stations need to offer regular traffic updates, or that people will reach for their radio when they see a long line of brake lights ahead.

“The idea that you need to program content around an event that is no longer yours to control is absolutely mind-boggling to me,” Hainsworth says.

But he’s turned that frustration, and those limitations, into a career that didn’t exist, and couldn’t have, in his early radio and TV days. He now runs several podcasts that are deeply rooted in reading the digital room and speaking to those who are interested in very particular topics centered on the changing world.

Instead of asking a handful of questions of the CD Howe Institute, a leading think tank in Canada, he has full 30-minute conversations with their experts, asking more than a dozen questions.

“They’re detailed (questions), they’re valuable intel as well. I’m giving back to my listeners way more today than three years ago when I was standing in front of a TV camera,” he says.

Michael Hainsworth is a Toronto-based podcaster who left a 20-plus-year broadcast career to embrace all digital media has to offer. He talks with It’s All Journalism host Michael O’Connell about the fear mainstream media has for digital, why that’s a bad idea and how the ice cream moment has melted.

478. Keeping journalists safe is a priority for former EMT