When a person has dedicated more than three decades of her life to serving her community through journalism, it’s hard to consider doing anything else.

Portia Li was one of the longest-serving reporters covering the Chinese-American community in San Francisco when she lost her job at the World Journal in April 2020, due to the pandemic. That same night, she decided to branch out on her own, creating the weekly bilingual Wind Newspaper. 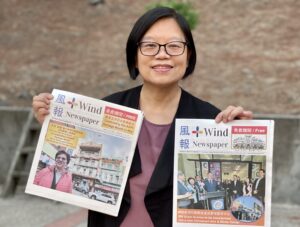 Portia Li holds up issues of Wind Newspaper, which she publishes every week about San Francisco’s Chinatown.

“I look at myself as a life-long journalist,” says Li, who went to journalism school in Taiwan before returning to her home in Hong Kong to work until she came to the United States for a master’s program in journalism and mass communication. She spent her professional career in the U.S. at the World Journal.

When she was informed that her days at the World Journal were done, she still had a handful  of stories left unwritten that she felt needed to be shared. The idea of starting her own publication came that same night.

“Everybody has different ways to serve (their community) but I think this is important, to keep them informed,” Li says. “I don’t just want to retire like this… I didn’t want to just be sitting there. This is not my style of life. This is how the Wind Newspaper was born.”

Li says she wanted to make the Wind a print publication because she favors traditional approaches and practices. She writes many of the articles herself for the weekly publication and takes many of her own photos as well.

The Wind is produced by Li with a staff of freelancers and digital assistance from her son, a software engineer who built and maintains her website. Li knows that while printing a newspaper is important to her, it’s also important to have a digital presence to reach a wider audience.

“I’m an old fashioned person,” she says. “When you visit our website, this is not the older generation’s media, it’s more to meet the needs of the younger generation.”

After 34 years covering the Chinatown crime beat for the largest Chinese language newspaper in the U.S., a veteran journalist suddenly found herself out of a job in the middle of the pandemic. Portia Li talks to It’s All Journalism host Michael O’Connell about her decision to publish Wind, a bilingual newspaper covering San Francisco’s Chinese-American community.