David Plunkert decided early on he probably shouldn’t try and pursue a career in cartooning.

Instead, he studied graphic design at Shepherd College (now Shepherd University) in West Virginia and found he really enjoyed the coursework. 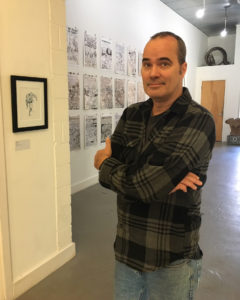 “You can make the argument that all things artists create are a form of visual communication,” said Plunkert, a Baltimore-based illustrator and graphic designer. “I like to think of myself as a visual communicator as opposed to someone who makes pretty pictures.”

Following the violent protests that left one woman dead and dozens injured in Charlottesville last August, Plunkert put together an idea that would become his first cover for the The New Yorker. It’s a strong image of President Donald Trump in a small black boat, blowing wind into a white sail shaped like a Klansman’s hat.

Plunkert worked for several years with an art director at the magazine and came to understand that covers were either designed based on a prompt from a different art director or the result of unsolicited submissions from artists.

“After the events of Charlottesville, I wasn’t thinking about illustrating something for them until Trump made his statement where he seemed to be giving cover to white nationalists,” he said. “I sent over Sunday night a crude sketch that had the essential elements that are on the final cover. Sunday night they contacted me and said they were interested in developing it as a cover.” 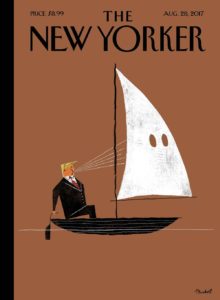 The next day, Trump went to the podium again with a stronger statement disavowing white nationalists. Plunkert thought his idea would be passed over and no longer timely. But that didn’t happen: “The next day, he walked his comments back again, so they contacted me Wednesday morning to do a color comp.”

The final piece was submitted Thursday morning and was live as the cover on the New Yorker’s website by noon that day.

The magazine’s staff “felt it was very clear in regards to what (the cover) was showing. It was reflecting the general audience’s feelings of what Trump’s position was,” he said. “It’s important what the cover doesn’t say: it’s not calling the president a Klansman or even a racist. It’s saying he’s in the boat with them or giving them some amount of cover. Context is important. Over many months, you had the president talking about different events where he’s not shy about calling out violence that involves minorities or immigrants, but when you’ve got white nationalists involved, he’s equivocating there’s bad people on both sides.”

Graphic designer and illustrator David Plunkert joins producer Michael O’Connell to discuss his view that designers are visual communicators who need to convey ideas and stories in a single piece of work and how it’s the little details that can make a powerful statement. He recently illustrated the new edition of Mary Shelley’s novel: Classics Reimagined, Frankenstein.