Dovid Efune is on a mission to restore American journalism.

“Today, journalism writ large is in crisis,” he told, It’s All Journalism host Michael O’Connell in the latest podcast episode. “It’s not a secret that trust in journalism and newspapers has reached all time lows.”

Last November, Efune purchased The New York Sun and relaunched it in February with a mandate to publish “straightforward, unblinkered news dispatches” and an editorial page that puts “principles over politics and people over party.” 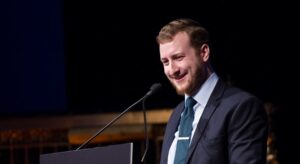 Benjamin Day launched The Sun as a penny newspaper in 1833 and it quickly became the news source for New York City’s working class. Over its storied history, it had many milestones and contributions to journalism, including publishing the first abolitionist editorial decades before emancipation, developing the first two-sided printing press and even hiring the first paper boy.

“The concept of how newspapers are distributed, and really putting the consumption of news and the idea that an informed public is far better for the functioning of democracy was really pioneered by The New York Sun.”

Efune admits to following an unconventional path to becoming an editor and publisher.

“I grew up in a quite a religious environment, Jewish Orthodox environment, went to a various yeshivas, which is sort of an Orthodox Jewish seminaries, where we study Talmud and practically applied Kabbalah and all kinds of exciting subject matters,” he said.

Through his studies, Efune met the son of Gershon Jacobson, who founded the The Algemeiner Journal in 1972.

“Gershon was quite the journalistic icon,” Efune said. ” He went to Columbia and University of Toronto. He wrote for The New York Post, The Herald Tribune, and The New York Herald Tribune. He covered Vatican II for Newsweek, for example.”

Jacobson’s real claim to fame was breaking the story of the capture of Nazi war criminal Adolf Eichmann for The Herald Tribune in 1960.

“They published a special edition of the paper 16 hours before anybody else,” Efune said. “John Hay Whitney, who was the publisher at the time, walked into his office, gave him a big hug and a $10,000 cash bonus for breaking the story, which I guess in today’s money is at least a Bitcoin and a half.”

When Jacobson died in 2005, Efune began talking to one of his sons about the best way to honor his father’s legacy. Three years later, Efune was brought on board at The Algemeiner.

“They weren’t in a position to drag somebody off the top of the mountain, and figured their best bet was to try and give this to somebody young and enthusiastic, which is maybe the most generous way I could put it,” Efune said.

Originally a Yiddish-language publication, The Algemeiner switched to English in 2008.

Following what he called a “baptism of fire,” Efune learned his craft and helped to make The Algemeiner a market leader in the digital age.

In recent years, Efune began discussing the future of The Sun with its former proprietor Seth Lipsky, which eventually led to the paper’s relaunch as a digital outlet.

In this week’s episode, Dovid Efune, publisher of The New York Sun, talks to It’s All Journalism host Michael O’Connell what’s wrong with American journalism and how The Sun aims to restore trust in journalism and newspapers.