When Luisa Wiewgorra was a high school student, she and some friends went to visit a radio station in their German hometown.

“I think the station just fascinated me,” she says. “It seemed super exciting to work there. The environment was exciting. I really like that it combines so many activities, like writing, talking to people, interviewing people and editing audio.” 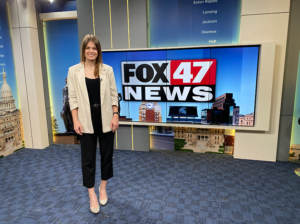 Luisa Wiewgorra went from being a student dreaming about working for a radio station in her hometown in Germany to covering local stories as a television reporter for Fox 47 News in Lansing, Michigan

That afternoon set Wiewgorra on a path to becoming a reporter on Fox 47 News in Lansing, Michigan, a journey that might seem a little unorthodox but she’s grateful to explore.

Before coming to the United States, Wiewgorra had an internship with the same radio station in Germany, then started a radio show there with other teenagers. She attended college in the U.S., thinking it would open more doors to her when she returned home.

“A lot of people in Germany told me to study something specific because journalism is too broad,” she says. “At the time, I wasn’t really interested in one topic, like politics or sports, which is why journalism seemed like the right choice.”

She also got a job at Starbucks during college to force her to speak English all the time. While she’d been studying English since elementary school, American English is much different, if only because native speakers tend to talk faster and use phrases and idioms that might not be taught in classes.

It was after an internship with a movie critic during which she learned video editing that she started to think about working in TV news, but she knew it wouldn’t be an easy path.

“I definitely thought there was a challenge,” she says. “I really didn’t think I would get an on-camera job in the U.S. I thought even in Germany it would be difficult in the beginning because it’s a very competitive field. I thought there’s no way I start after college. I thought I’d start as a writer somewhere. I applied for all kinds of jobs and then I was kind of like, OK, maybe it’s not meant to be right now.”

But, to her surprise, Wiewgorra got a break from a reporter she knew who worked at Fox 47 in Lansing. “After a lot of talks and help with my demo reel, he recommended me to the channel. I think that really helped me a lot to get this job. I never thought this would happen in the U.S. It’s the greatest chance I’ve gotten so far.”

The station is hyper-local in its coverage approach, with each reporter assigned to cover a number of neighborhoods in its coverage area. Wiewgorra started off without a designated coverage area, instead reporting on stories of broader interest, including pieces on water loss and the difficulties lower-income families had in paying their bills. She now covers Charlotte, Eaton Rapids and Grand Ledge.

To get her story ideas, Wiewgorra says she checks neighborhood Facebook pages to see what topics are important to the people living there. One of the biggest stories of her tenure so far came from such research: “There were 23 volunteer firefighters that quit the fire department and that’s been a story for three days over the last couple weeks,” she says. “Those firefighters quit because they felt there was a lot of miscommunication between the city council, particularly the mayor and the firefighters. I believe they quit to send a statement and hope for a resolution and hopefully come back, because they didn’t want to leave the city without firefighters.”

Wiewgorra says she’s been welcomed by her community, with some people reaching out to thank her for being a person speaking accented English on their televisions. She encourages people in similar situations to continue pursuing their dreams.

“We know what we’re capable of in our own language, so we should believe we can do that in our second language,” she says.

Editor’s Note: It’s All Journalism interviewed Luisa Wiewgorra in April for this podcast episode. She recently left Fox 47 News to go back to school and earn a master’s degree in business administration. Wiewgorra said her long-term goal is still to purse a career in journalism.

Luisa Wiewgorra went from being a student dreaming about working for a radio station in her hometown in Germany to covering local stories as a television reporter for Fox 47 News in Lansing, Michigan. Wiewgorra shares her story with It’s All Journalism host Michael O’Connell.

523. Will Be Wild podcast explores lead up to Jan. 6 insurrection