Covering how 18 counties in western North Carolina spend government funding might not sound like a thrilling beat for a reporter, even if she really enjoys writing about government finance.

But Shelby Harris, an Asheville-based reporter for the Carolina Public Press, has been finding more stories than she expected in those counties, their small and large cities and towns, and how they are deciding to use their funds provided by the American Rescue Plan Act (ARPA). 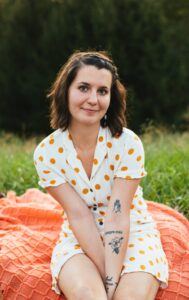 “I think a lot of people are not familiar with ARPA funds and that’s OK. It’s a very complicated piece of legislation and journalists need to go into it with that mindset,” she says. “ARPA is a massive, multi-trillion-dollar piece of federal legislation passed in spring 2021. The goal of the legislation was to pull the nation out of the wreckage of the pandemic and also prepare us if we have more shutdowns and lockdowns.”

The federal government, through the Department of Treasury, dispersed funds directly to local governments and to the state for distribution. In the 18 counties of western North Carolina, that includes around 60 towns and three cities.

Among the challenges of following the money, Harris says the bigger cities have the capability and took it upon themselves to build websites tracking how the government assistance money was spent. Smaller municipalities and rural areas didn’t have the ability to do that, meaning she needs to ask directly.

“That’s the bulk of what I’m focusing on and they’re not, first of all, they’re not as keen on talking to the media. Secondly, they don’t have these giant websites that list everything out,” Harris says. “The way I go about that is picking up the phone and calling them and saying, ‘What did you spend your ARPA money on?’”

Harris will also spend time doing good old-fashioned records reviews, poring over meeting notes and searching for certain key terms to find out where money is being allocated. “Then I’ll go back to the cities and they’re usually a little more keen on talking to me if I know what I’m talking about,” she say.

Harris started her time at Carolina Public Press, a nonprofit organization that specifically hired her for this job after a donor requested this type of coverage, by writing up an FAQ on APRA overall. “I go back to that piece a lot. I get confused, as we all do. It’s complicated and there are lots of little ways to spend (the funding).”

For instance, there are four main “buckets” into which ARPA funds can be spent: Infrastructure, loosely defined as “anything that helps a society function”; premium pay for essential workers; broadband internet expansion, and the revenue loss bucket. “That means that towns, cities, counties can put up to 10 million ARPA dollars into their operating budget, even if they haven’t experienced revenue loss. They can move it there and spend it on anything they want. They still have to document it, but they can spend it however they want,” she explains.

Some municipalities are getting creative with their funding, moving ARPA allocations into their revenue loss column and then addressing social problems and shortcomings created by the pandemic. One town is using it to match financial assistance provided through USDA’s Supplemental Nutrition Assistance Program (SNAP, formerly known as food stamps) and doubling people’s benefits at farmers markets.