The pandemic was an opportunity for Victor Hernandez to change his life.

With newsrooms shut down and most people staying at home, he saw the opportunity to expand his career, enrolling in an online course offered by West Virginia University, NEWSTART, for people who are interested in owning and operating their own independent daily or weekly news outlet. 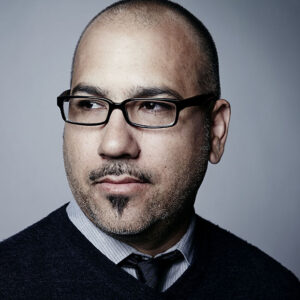 The capstone project for the class was another unexpected opportunity, resulting in his recently published guide, “Philanthropy & Newsroom Positions Playbook,” showing how journalists and newsrooms can find funding to help support hiring additional staff for the short- and long-term.

“It was a wonderful intersection of needing to satisfy a major research endeavor but also solving a right now, relevant challenge I was facing in my professional life,” says Hernandez, who is now the chief content officer at WBUR, Boston’s NPR station, but was working at Cascade Public Media in Seattle in the earlier days of the pandemic.

“As executive editor there, overseeing a diverse newsroom of 30 journalists and digital reporting, I was exposed to grant opportunities and funding opportunities to add to the scope of our newsroom in a temporary termed basis. I was new to public media, my background is in commercial broadcast stations. … I wasn’t clear on the best way to proceed and how to apply for certain programs.”

More than 10 percent of his newsroom staff were in positions funded by foundations and grant support and he was told at the time that a “good number” was in the 10-15 percent range. “Anything north of that would be taxing and difficult to support over time,” given the arduous nature of filling out the grant applications and the process to get those requests fulfilled, he says. But he wondered where that idea came from and called friends in similar newsroom positions to see what their experience was like.

“There was not an alignment on what the appropriate balance of how many of these roles you should have and what the best strategies were to not just take one or two positions a year, but to develop into fully operationalized roles within your organization, so you’re not just getting one-shot wonders, a nice boost, and then you come back to earth in a year,” Hernandez says. “I couldn’t find an industry guide book, there was nothing I was aware of, at least recently, to develop frameworks and measure the impact of these reporters as they arrive and how you provide for success in what they’re doing temporarily so they can be sustained.”

Hernandez decided to take that knowledge gap on himself and created his playbook.

“The playbook is a collection of perspectives on different levels,” he says, and it includes a series of conversations with people who have successfully brought one- or two-year contract reporting positions, like those offered through programs such as Report for America, and made them full-time permanent jobs within a newsroom, often with a focused and singular beat.

Victor Hernandez, chief content officer at Boston’s NPR news station WBUR, went back to school to bolster his digital skills. In the process, he wrote the “Philanthropy & Newsroom Positions Playbook,” which serves as a guide on how journalists can find funding to help them support their journalism efforts.