For a woman who grew up in a small town in the south of England, America was the dream. 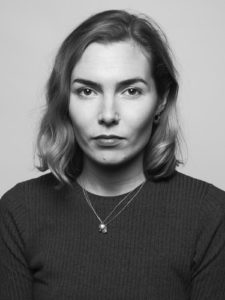 Working as a fashion journalist, of a sort, or as a digital journalist wasn’t the dream – because Charlet Duboc didn’t know it was even a possibility.

“My life seem pretty limited: marry a boy in the village and have a few kids,” said Duboc, a correspondent and senior documentary producer at Vice Media. “I was very much a black sheep. None of the women in my family had much education.”

Some of Duboc’s education came from American culture: ET, pizza, Walkmen, MTV. “America was a magical world. I became obsessed at a young age – I ended up studying American studies at university in London.”

The world of pop culture led her to London’s social scene and a stint as a DJ. She made friends with people who worked at VICE, eventually interning there and writing music reviews. When she was told VICE wanted more fashion stories, she ended up on a plane to Pakistan with a friend and a camera to cover that nation’s first fashion week.

“I never wanted to be a fashion journalist,” Duboc said. “I didn’t have much reverence for the fashion world. I love clothes, but it wasn’t something that drove me professionally. I wanted to do culture.”

If she thought American culture was a different world from what she was used to in the UK, one of her most recent expeditions, to North Korea, was something altogether unexpected.

“The thing about North Korea is that you only get to see what everybody else has already seen,” she said. “I’d seen it all before on TV. I knew what the hotel looked like, I knew what the landmarks looked like we were going to see. But nothing can prepare you — the thing that feels weird is that you feel weird all the time. You’re anxious the whole time.”

In all, she filmed and produced two shorter pieces for Vice’s nightly news show on HBO and one longer piece, about 15-20 minutes, for the network’s weekly news magazine.

She was in the country for nine days in the fall of 2017 but it felt much longer, Duboc said.

“You’re under scrutiny the whole time. You have to behave like you’re in boarding school.” A call to her boss in the middle of the night would notify her of an early morning call time. Information about the next day’s schedule was routinely withheld.

On the one hand, Duboc knew she was getting an opportunity very few people in the outside world will ever have, taking that chance to peak behind the curtain of one of the world’s most secretive nations. At the same time, she found herself thinking “get me out. I want to go home. You want to enjoy it but you’ve got this constant feeling of dread following you around.”

Charlet Duboc, a correspondent and documentary producer for VICE, talks with producer Michael O’Connell about her obsession with American culture, her adventures in fashion reporting and a recent trip to North Korea during which one of the most controlled nations in the world felt at once too familiar and alien.

#280 — Vice News Tonight and its different take on political news