But MSNBC’s Rachel Maddow and her former producer Michael Yarvitz went a step further: they wanted to look into the only sitting vice president ever to leave office in disgrace. 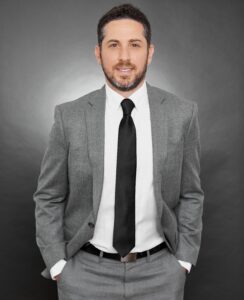 Their book, Bag Man: The Wild Crimes, Audacious Cover-Up and Spectacular Downfall of a Brazen Crook in the White House, examines the missteps and blunders of Spiro Agnew.

“We started talking about trying to find a story from history that we could tell that could resonate with the moment we were living in, this not unprecedented but rare occurrence where a sitting president or vice president is under criminal investigation,” says Yarvitz, who also co-wrote and served as executive producer of the affiliated Bag Man podcast. “It’s a fairly short list.”

They quickly decided to focus on Agnew because, he says, “Neither of us knew too much about the Agnew story, as most people generally do not, and we looked at it as, this might be an interesting historical parallel to what we’re now experiencing with the Trump presidency.”

As the Mueller investigation went on, people asked whether a sitting president could be indicted on criminal charges, something Mueller himself felt restricted from answering. The generally accepted answer — that a president cannot be indicted while in office — originates in a pair of memos from the Justice Department and the Office of Legal Counsel during the Nixon/Agnew administration, during the Watergate investigation, effectively saying that while a president can’t be charged, a vice president can.

“There’s a straight line from the Agnew crisis to Robert Mueller effectively saying my hands are tied, I can’t indict Trump even though there are potential crimes committed here,” Yarvitz says.

Yarvitz and Maddow took their book idea to the MSNBC executives and, once it was given the go-ahead, they spent months reviewing documents in the Nixon Library in California, Agnew’s archives at the University of Maryland and the papers from George Beall, the U.S. attorney in the case, at Frostburg State in Maryland.

Then, for the second phase of their research, they dug deeper.

“It took some legwork to figure out where everyone is,” Yarvitz says. “It’s 45 years after the investigation has been completed. It was tracking down who’s still alive to talk about it and where are they, can we go visit them. That was a process unto itself. We ended up going and visiting each one of these guys involved in the investigation and sitting down for hours, reliving what it was like to go through it. We found some stuff in the archives that even these guys didn’t know about.”

Michael Yarvitz, co-author with Rachel Maddow of Bag Man: The Wild Crimes, Audacious Cover-Up and Spectacular Downfall of a Brazen Crook in the White House, joins producer Michael O’Connell to discuss the book and its accompanying podcast. He explains their research process, including sharing new information with people who prosecuted former Vice President Spiro Agnew.

How newsrooms should handle requests to unpublish stories