Julia Paskin envisioned herself an artist, not someone who would work as a writer or reporter.

When she was in her 20s and fighting depression, due in part to feeling “deeply unhappy” and “needing to feel fulfilled in my work,” she enrolled in classes at Pasadena City College. There she learned from the vice president of operations at KPCC in Los Angeles, eventually working through internships to land a reporting job there. 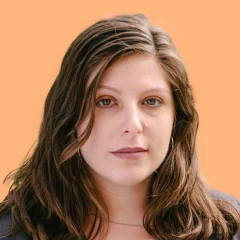 Not being able to imagine a scenario that existed on the periphery of her life is something at the heart of her new series, “Pushed Out: LA’s Unhoused Women,” a partnership between KPCC, LA’s NPR station, and LAist.

“Our newsroom received a grant from the Blue Shield Foundation to cover the intersection of domestic violence, intimate partner violence, and homelessness,” Paskin says. “We just were given that edict, go report on this, tell a bunch of stories, however you do this is up to you. I started looking at the data, which is not terribly substantial — it’s not reported enough — and figuring out who are these people, who are the most affected and staggeringly it’s women. There are many permutations of how experiencing or surviving intimate partner violence will lead to becoming unhoused.”

There have been people in Paskin’s life who have experienced homelessness, and she spent much of her childhood “in housing court trying to stave off eviction.” As a result, much of what she heard from homeless women during her reporting was more of a surprise to her editors than to her, with a few exceptions.

“The sheer brutality of it is hard to bear,” Paskin says. “Maybe what was the most edifying was how law enforcement played a role in making living outside incredibly difficult for women. Being roused in the middle of the night and criminalized for being unhoused. Some of the requirements for entering a women’s shelter are shocking: You can’t bring your kids with you. You can’t work anymore. You understand that policies were put in place for a reason, mainly for the safety of the residents and the staff, but how do you move forward with your life? How do you expect someone to work their way out of homelessness when you don’t allow them to work?”

Paskin wanted to make sure the women she spoke with had a safety and support system in place, in case telling their stories proved difficult or retriggered their trauma from the harrowing experiences they lived through. Journalists sometimes aren’t as careful or considerate when it comes to pursuing complex, emotional and difficult stories like those involving abuse and struggling to survive in dangerous conditions.

But she also wanted to tell the stories responsibly and in a way that answered questions people who have never been close to this situation might have.

These are the kinds of questions abuse survivors often hear, including “Why did you stay for so long? Why didn’t you just get a job? The assumptions people make,” Paskin says. She wanted “ to illustrate the point that becoming homeless is incredibly easy in America, especially in a housing market like Los Angeles. When you start to add the layers of vulnerability, it becomes all the more plausible to become unhoused. We wanted to pull away the mystique. We’re an NPR station, we have a lot of listeners of privilege. We wanted to illustrated that it happens in a tangible way to people doing the best they can.”

Julia Paskin is a radio producer and writer for KPCC and LAist who recently launched a series called ‘Pushed Out: LA’s Unhoused Women,’ telling the stories of women who are experiencing homelessness after leaving an intimate partner abuse situation. She talks with It’s All Journalism host Michael O’Connell about the challenges of sharing these stories in a responsible way while making it clear that homelessness could happen, easily, to almost anyone.

Pushed Out: How domestic violence can lead to homelessness