From writing a fanzine more than 20 years ago to joining panel discussions about women in the music industry, Shirley Halperin says she keeps one foot in the world of old school print journalism and another in the digital present.

“I came up in a time when the rock journalist was this sort of heralded profession,” says Halperin, the executive editor for music at Variety, where she leads coverage for both the print edition and the magazine’s website. “I find myself and my age to be a huge advantage. … I was around for the biggest physical album sales week in history —until Adele broke it — NSYNC in 2001, with 2.6 million albums, CDs, physical media, sold in one week. And then the music industry cratered for the next seven, eight, nine, 10 years. Things were bad. There were huge amounts of layoffs and those positions of being a music editor at a local paper, they started to go away.” 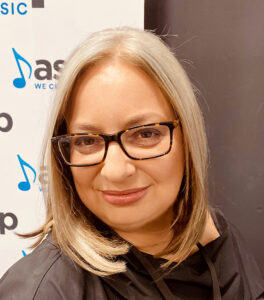 Shirley Halperin is the music editor at Variety.

Realizing that the industry was changing, and her job needed to change with it, she learned to embrace the daily grind and learn how to adapt and use her skills for multiple platforms.

“I worked at UsWeekly, a major magazine that didn’t have a website in 2002. I had to morph into being equally adept at digital as print. I think a lot of people don’t have both those skills. You’re either really good at one or the other and juggling the two is difficult. I feel like I’ve learned how to do it because I’ve had to.”

How, exactly, has she learned to not just juggle the different demands of writing for digital and print but to do it well?

“It’s about managing your time well,” Halperin says. “When I started at the Hollywood Reporter, where we’d hold (an article) for print, to wait for the magazine instead of putting it online. That’s an old school mentality. I still get that from some of my counterparts at magazines. It really is about being able to switch back and forth. I have the way I do my day: The first half of the day is web-focused. When things quiet down in the evening, I can work on print stories. It’s a grind.”

Now add COVID-19 and a year without in-person concerts into the mix and it’s not just music journalism that’s changed.

Putting together a magazine, in which people had been gathering in meeting rooms to pore over photos and layout options, became more challenging. Remote working was already in place before the pandemic, but the subject changed pretty drastically, from who’s touring and releasing a new album to how will the industry adapt and survive.

“The concert industry had been such a cash cow for so many years, running at top speed,” Halperin says. “I never expected to see a massive industry go from 100 to zero in such a short time. It’s really meant a lot of working the phones. The old-school journalists know how to do this and that’s what it’s been like, to cover how agencies, promoters, venues are going to change the way they tour so people don’t get sick coming to see a live show.”

There’s also the business side of things on a larger scale.

“That’s been the biggest change, really, having to look at a beat that stock prices are fluctuating, there’s no money coming in, there are layoffs, there are executives not taking salaries. All that has happened in the last 18 months for a company like Live Nation.”

Shirley Halperin is the executive editor for music at Variety for both its online and print music coverage. She talks with It’s All Journalism host Michael O’Connell about covering all aspects of the music industry, how old-school journalism practices differ from the digital world and the way the music industry adapted to COVID-19.