It’s been almost a year and a half since we first met Nigel Poor, the cohost and co-creator of the Ear Hustle podcast.

“We had no idea what was going to happen. It really took us all by surprise,” said Poor, a Bay Area photographer and educator who produces the podcast along with Earlonne Woods and Antwan Williams, inmates at San Quentin prison in California. 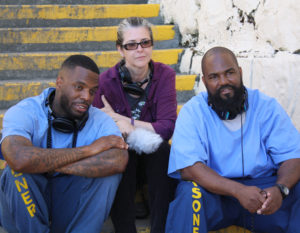 The three producers of the Ear Hustle podcast sit on stairs at San Quentin Prison in California.

They work together in the prison’s media lab, interviewing other inmates about incarcerated life. The podcast got its start after winning Radiotopia’s Podquest contest in 2016, starting its first season in May 2017.

“Ear Hustle is, to my understanding, the first podcast to ever be completely produced inside a prison,” she said. “We are not a crime podcast. We concentrate on the everyday stories of life inside prison from the perspective of those who live it. We really concentrate on the small details that help give life meaning and really explore how you make a life once you become incarcerated.”

Unlike other podcasts, Poor and her hosts don’t have the luxury of fancy equipment or even soundproof settings or recording their interviews. They share space in the media room, negotiating with others working on videos and varying projects.

San Quentin has been supportive of the project, but each episode must be reviewed and cleared by the prison’s public information officer, Lt. Sam Robinson. He listens for factual errors, ensuring the correct language and terminology is used, but also keeps an ear out for any conversation that could cause problems for inmates.

“We have not been told there’s a story we can’t do yet,” Poor said. In fact, the most difficult episode so far, according to the PIO, was one on the prison’s “boom boom room, which was about how people are legally and illegally finding ways to be intimate with their partners. [The officer] said that was the hardest story to deal with. He’s really gone to bat for us.”

Robinson is even included in the podcast’s “About Us” page for his contributions.

Nigel Poor, co-host, co-producer and co-founder of the Ear Hustle podcast, joins Michael O’Connell and Nicole Ogrysko to provide an update on the surprising — to her! — success of the podcast, believed to be the first one ever wholly produced from inside a prison.