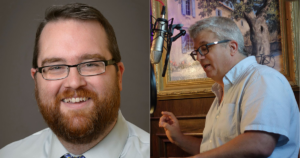 Nick Rogers and Lou Harry, two of the contributors to The Quill’s 110 journalism movie list.

We’re pleased to revisit the 10 most popular episodes of It’s All Journalism from 2021  as an end-of-the-year gift to our listeners. We’ve covered a lot of ground this year, with a focus on the ever-changing journalism landscape in terms of student press, unions and buyouts, and people who come to journalism and media from all walks of life and views on creativity.

Every year, we find a few podcasts that really stood out. This year, our second-most popular episode featured the ambitious list of 110 journalism movies as assembled by Quill Magazine and the Midwest Film Review to commemorate the 110th anniversary of the Society of Professional Journalists. Unsurprisingly, the list sparked a lively debate and the editors have added to it, with the total number of films listed now approaching 150. Quill editor Lou Harry was kind enough to provide us an update on the project.

Be sure to check back next week when we revisit our most popular episode of the year.